The Significance of Colour in Joker (2019)

Movies are all about telling a story. What makes movies special is on how many different levels that story gets told, which is often overlooked but goes far deeper than just the surface that is plot. Here we will have a look at Todd Phillips’ newly released Joker (2019), the significance of primary colours to the structure of its story, and why Arthur Fleck’s wardrobe is one of the most important props of the movie.

When watching a film, the most obvious story telling device is plot: What actually happens in the world, events that take place, characters that act and react. I won’t go into plot and structure here at all, since that already gets plenty of attention as is. A close second in terms of story telling is music and the scoring, which is incredibly effective in setting the mood. Most viewers consciously only experience a movie on these two levels, but the rabbit hole goes much deeper and it’s always a shame to reduce any film to its plot alone. Props, costume, editing, shot variation, speed of cuts, camera movement, camera angles, locations and more all do their part in telling the story. As a visual artist, the one I always look out for the most is colour.

While colour has always been relevant to film - even in the black and white era, when brightly coloured lights and makeup were used to achieve better contrasts and have more control over tonal values in the final greyscale picture - the advent of colour grading goes hand in hand with the introduction of digital editing. Once movies were fully digitized and edited on computers rather than by manipulating film, a whole new world opened up. The first movie commonly credited to be fully digitally colour graded is the Coen Brothers’ O Brother Were Art Thou (2000), and today it’s hard to imagine a movie without it. But what is colour grading?

Colour grading is the process of adjusting colours in individual or multiple frames, shots and scenes for the purpose of conveying a message, supporting the plot, and unifying the visual feel of a film - bringing it all together so to speak. This is done both digitally in post-production as well as by carefully planning out shots beforehand. It has been abused a lot by clumsy directors (take a look at how every shot in a Michael Bay movie is basically just orange and teal for maximum contrast everywhere at all times), but if used with thought and nuance it can make a good movie fantastic and give it so much more depths. Joker (2019), colour graded by the fantastic Dustin Wadsworth, is an example of that.

The basic building blocks of colour grading used in Joker are the primary colours red, blue and yellow, each signifying a very distinct aspect of the story. Arthur Fleck’s struggle is one both inside his own head as well as in a society that disregards him. Blue is the colour of that city, of a Gotham that pushes him down and alienates him for being different. Blue is the society around him, which is the suffocatingly dominant colour of the first act. The teenagers who steal his advertising sign and then rob and beat him up in an alley are dressed in blue, the woman on the bus who gets angry at him for fooling around with her son is wearing blue, all outdoor shots are tinted blue, the Wall Street Three that beat him up on the subway are in blue shirts and suits, the office of his therapist who never listens to him is blue, the hospital room his mother ends up in is blue and so on. Whenever we see the colour blue, it’s working against our protagonist. 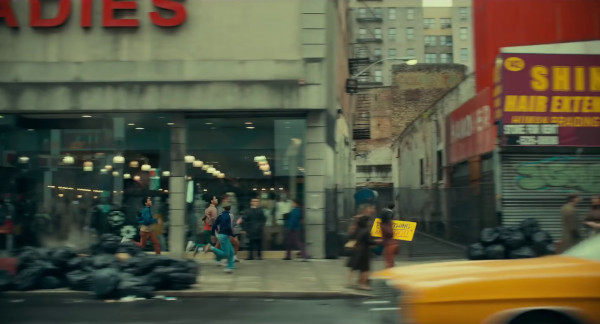 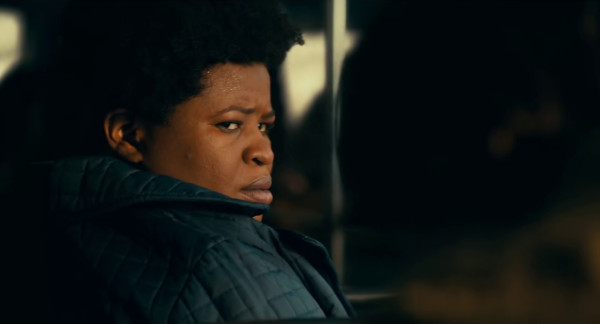 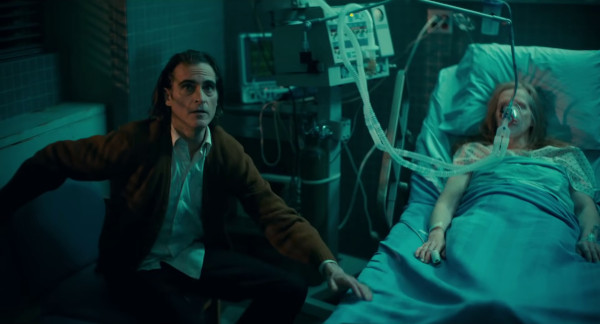 Red is the opposite of that: it represents sanity, love and Arthur’s healing. We see it rarely, much less than blue and yellow, but when we do it’s a positive experience. Sophie, Arthur’s neighbour who he imagines a relationship with is frequently dressed in red, the young boy on the bus he fools around with wears a red jacket (until the mother in blue shuts it down), Murray’s TV show is dominated by red while Arthur enjoys it with his mother. When he is invited onto the show his confidence rises; he dresses in all red at home while practicing his entrance - the same outfit he wears during his first stand-up comedy show that marks a big step up for him personally, in a small club lit by red table lamps with his neighbour Sophie present, also wearing red. That same stand-up scene comes up again later when Murray shows a clip of it on his show to mock Arthur - but the image is of course faded and tinted blue. 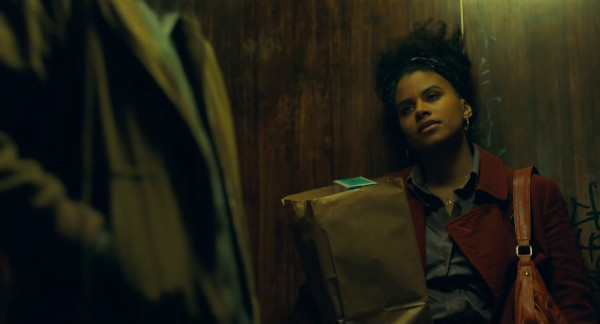 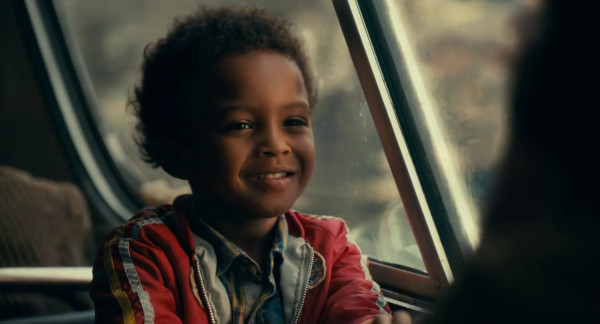 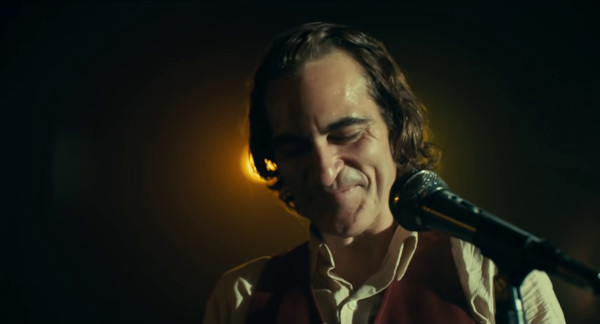 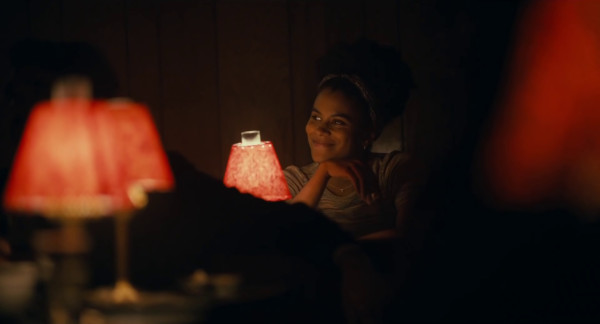 The last and most important colour is yellow. It represents Arthur’s descent, him losing his control and his grip on reality, but it’s also his strength and resistance. Yellow is his dark side that comes out more and more to fight back the oppressive blue of a society that shuns him. Arthur often wears a yellow hoodie in difficult times, the walls of his appartment are yellow, there’s weak yellow street lights guiding his way home from work through the blue night, and the walls of the mental ward inside Arkham hospital were he goes to retrieve his mother’s file (which is red by the way, since it finally gives him clarity about her) are also yellow. The teenage muggers in the early chase sequence steal his yellow sign, then break it over his head along with all his resistance and power. He is left weak and alone on the ground. The most beautifully shot and colour graded moments are when Arthur begins to take the power back. Him getting beat up on the subway quickly turns to yellow when he fires his first shot, and when he chases the last survivor crawling away for his life on the subway platform to execute him he is all-powerful. The shot is entirely yellow - even though it is night, the blue has been completely eradicated. 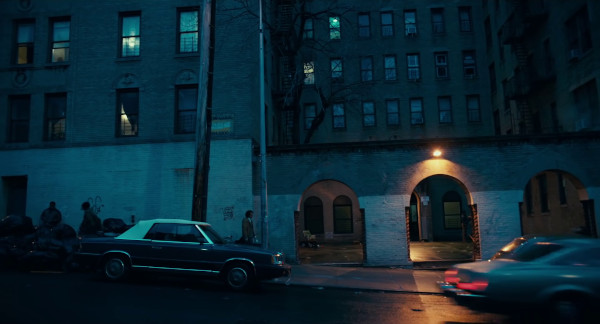 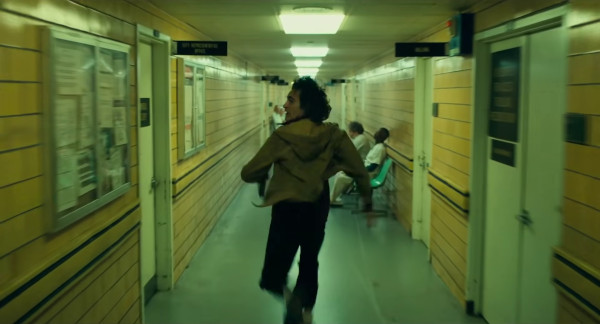 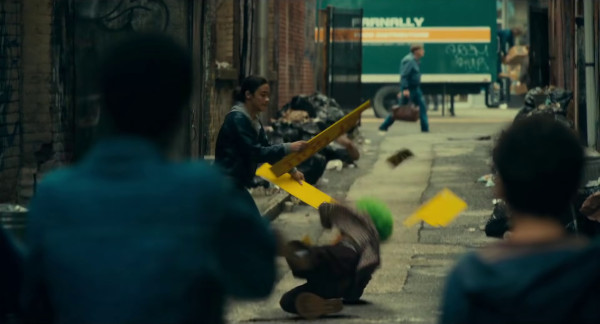 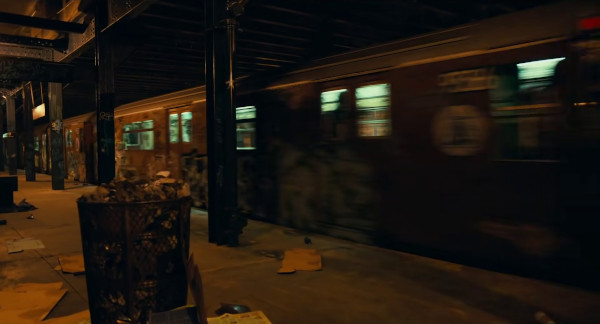 The conflict of these colours, their clashing, is what makes Joker such a strong movie colour-wise. So much of what’s going to happen is being foreshadowed by colour, even more so than it is by music (which here sometimes tends to be a bit too on the nose for my taste with its overuse of “happy music just turned to creepy sounds, so get ready for something bad to happen”). A few examples: When Arthur visits his neighbour Sophie to kiss her she is dressed in blue with hints of red, but her entire apartment is an intense yellow suggesting Arthur’s descent into madness to be at play, as is confirmed later. Young Bruce Wayne wears yellow, establishing a bond between him and Arthur and hinting at the trauma he will experience soon. When the two police officers chase Arthur into the subway the scene outside is mostly blue from an overcast sky, but once they are overpowered by rioters inside the train yellow dominates. When Arthur sneaks into the theatre to confront Thomas Wayne he wears a red bell boy’s outfit and genuinely enjoys watching the Charlie Chaplin scene, and the theatre is a mixture of reds and yellows - at that point Arthur is right on the edge between healing and madness, and the conversation with Wayne is about to decide which of the two paths his life will take from then on out. But when he follows Wayne to the bathroom the entire room is yellow, and of course Arthur takes off the red outfit to reveal his yellow hoodie underneath (which I was so waiting for) before starting the conversation. It is doomed before they even begin talking. 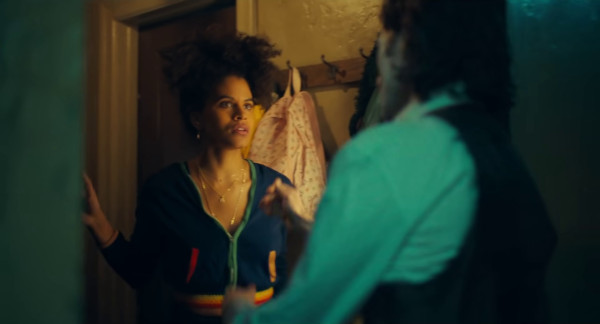 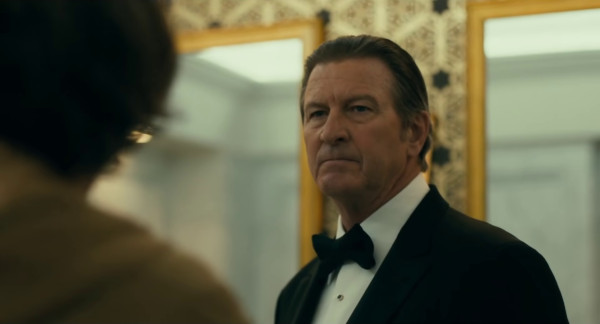 In the end Arthur’s final outfit when he becomes Joker achieves balance: a red suit with yellow vest underneath - he has accepted his descent, he has embraced the strength that comes from being different and has found healing through that acceptance. He is no longer sorry, doesn’t accept society’s dictate on what is funny and what isn’t, on what he is supposed to be and how he is supposed to appear and behave. Waiting for his entrance off-stage in blue shadow, he is showered in yellow spotlight as the curtains open and he enters the stage. The culmination of his struggle peaks in killing Murray, the symbol of what appropriate and socially accepted life is supposed to be. Emancipation through murder. 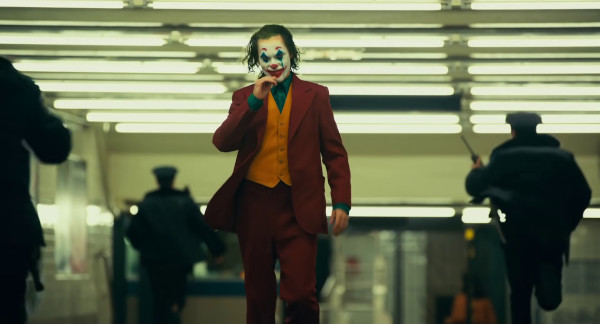 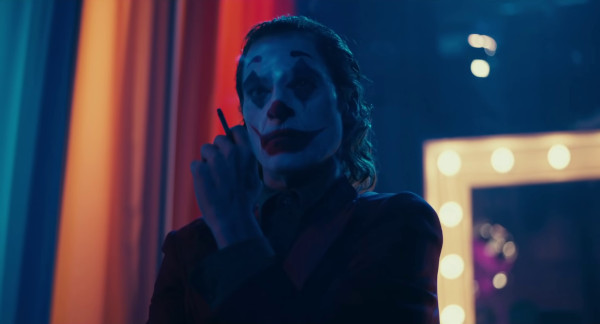 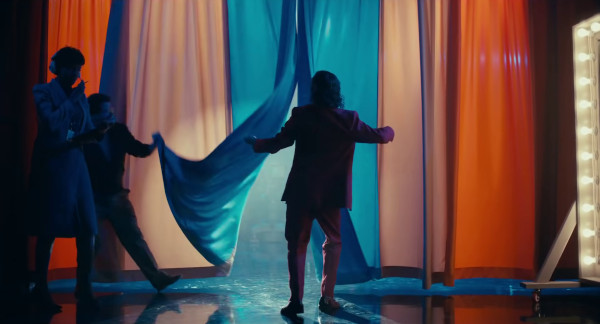 The closing scene shows Arthur in a medical institution, and everything from the architecture to furniture to the outfits is white, the union of all colours. The only thing that stands out is the therapist that talks to him - until he presumably murders her off-screen. He has found himself and has achieved an inner equilibrium. The colours are no longer fighting, instead they have become one - Joker is born.

Thank you for reading. If you enjoyed this article, please consider signing up to my mailing list or following me on social media to get notified whenever I publish a new piece.